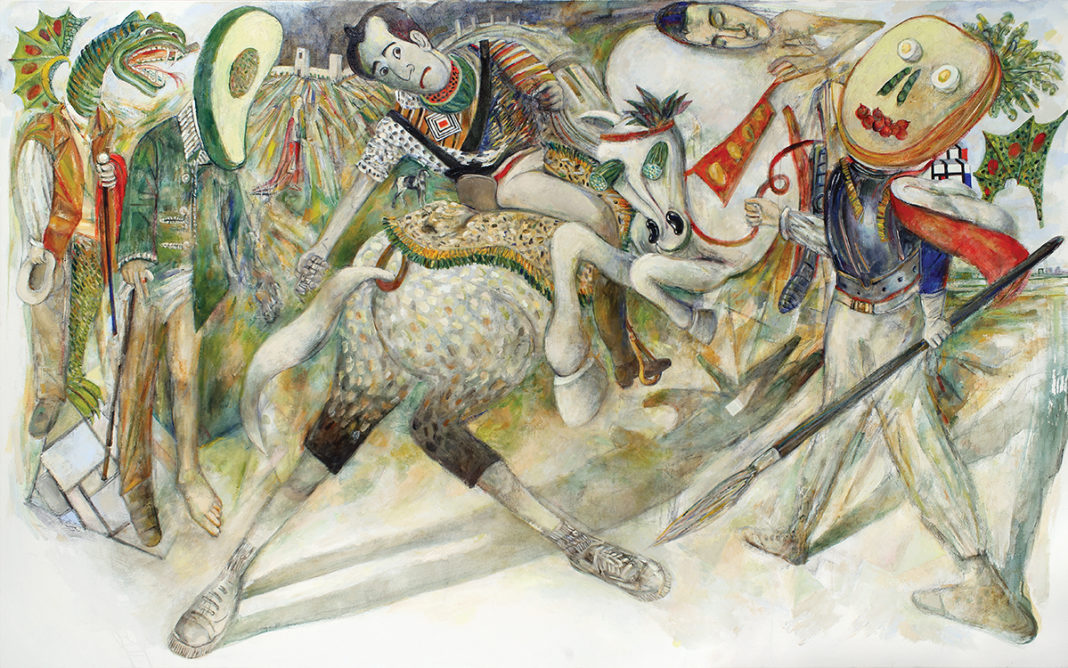 “Rather than clever, gracious, deft and proper,
I prefer being awkward, unpleasing, disconnected
but true to myself.”
Fu Chan, Calligrapher 17th Century China

ARTIST INFORMATION
Arturo Rodríguez is a Cuban-born, American artist with an oeuvre spanning four decades whose paintings have been exhibited worldwide. Underlying Arturo Rodríguez’s work is a scaffolding constructed of his life experience: in 1971 he was first transplanted from Cuba to Spain as an impressionable teen, then again as a young man to the New World metropolis and hub of Caribbean and Hispanic culture – Miami. The uprooting exposed him to the entangled complexities of the human condition across time, place, and cultures, and incited a lifelong curiosity.
In Madrid, he discovered the Prado Museum and was enraptured. Diving headlong into the affair of his life’s work, the masters in its galleries educated and influenced him; he drank deeply from the fountain of their inspiration. In this genesis, a yearning to connect to the source of all artistic energy – to channel it- brought forth the artist within. In 1973, his family settled in Miami, where he completed high school and studied life drawing very briefly at Miami-Dade Community College. It was at this time that Rodríguez came in contact with the great music of the United States: blues and jazz. This music, with its element of both grief and improvisation provided the artist with important elements that would develop in his work. During the 1980s, Rodríguez continued to travel throughout Europe, revisiting Spain to study again the works of the 17th century Spanish masters and of Goya, and Italy, where the painter lyness of the Venetians (Giorgione, Titian, and Veronese) also provided significant lessons. He now lives and works in Miami, Florida.
The artist’s works are collected by the Whitney Museum of American Art, the Metropolitan Museum of Art, the Smithsonian American Art Museum, the Israel Museum in Jerusalem, and profuse private and public International collectors. He is the recipient of numerous grants and awards: the Joan Mitchell Foundation grant in Visual Art, two-time recipient of the Cintas Fellowship, and two-time recipient of the Florida Individual Artist Fellowship award.

1981
He was commissioned by the City of Miami, , to paint “Homage to the Afro-Cuban Music”, a three piece Mural, to celebrate Hispanic Heritage Week. The Mural was placed on top of Libros Españoles, S.A.’ store, on SW 19 Avenue and 8th Street.

1987
He was commissioned by Florida International University, Miami, Florida, to paint “Exiles” (Exiliados) to be presented to Pope John Paul II , as official gift during his visit to the Florida State. A poster was created.

1990
Appearing in interview by the BBC of London in the documentary HAVANA, realized by the Czech director Jana Bokova. Rodriguez talks about his childhood in Cuba and the ironies of his life in exile. Filmed and Broadcast in April 1990 in Havana and Miami, Florida, about the tragic reality of the Cuba of today.

1994, 1996
He created the cover artwork for the legendary Cuban bassist Israel Lopez (Cachao)’s /Grammy Award-winning CD “Cachao Master Sessions Vol. l (1995) and Vol. 2 (1996) on Crescent Moon label for Sony Records. Both were granted a Grammy Award in the United States.

2007
Nominated as a candidate for a 2007 Louis Comfort Tiffany Biennial Award.

ABOUT LnS GALLERY
LnS is a multi-use art space specializing in contemporary art with a focus on Miami-based artists, and is guided by and named after the gallerist team of Luisa Lignarolo and Sergio Cernuda, partners in marriage and business. The 5000-square foot space is located in North Coconut Grove, within walking distance from the Coconut Grove Metrorail Station.
2610 SW 28th Lane, Miami FL 33133305 987 5642
INFO@LNSGALLERY.COM
WWW.LNSGALLERY.COM
HOURS Tuesday-Friday 11:00am-6:00pm
Saturday 12:00-5:00pm
Sunday and Monday by appointment only