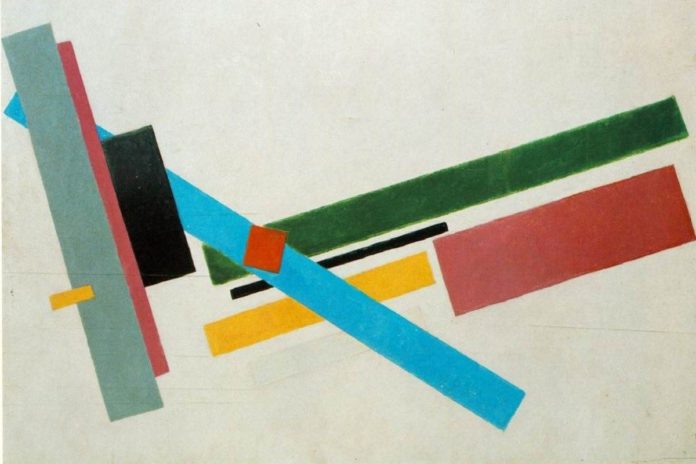 Name given by the Russian artist Kasimir Malevich to the abstract art he developed from 1913 characterised by basic geometric forms, such as circles, squares, lines and rectangles, painted in a limited range of colours

The first actual exhibition of suprematist paintings was in December 1915 in St Petersburg, at an exhibition called O.10. The exhibition included thirty-five abstract paintings by Kazimir Malevich, among them the famous black square on a white ground (Russian Museum, St Petersburg) which headed the list of his works in the catalogue.

In 1927 Malevich published his book The Non-Objective World, one of the most important theoretical documents of abstract art. In it he wrote: ‘In the year 1913, trying desperately to free art from the dead weight of the real world, I took refuge in the form of the square.’ Out of the ‘suprematist square’ as he called it, Malevich developed a whole range of forms including rectangles, triangles and circles often in intense and beautiful colours. These forms are floated against a usually white ground, and the feeling of colour in space in suprematist painting is a crucial aspect of it.

Suprematism was one of the key movements of modern art in Russia and was particularly closely associated with the Revolution. After the rise of Stalin from 1924 and the imposition of socialist realism, Malevich’s career languished. In his last years before his death in 1935 he painted realist pictures. In 1919 the Russian artist El Lissitsky met Malevich and was strongly influenced by suprematism, as was the Hungarian born Laszlo Moholy-Nagy.

Kazimir Severinovich Malevich was a Russian avant-garde artist and art theorist, whose pioneering work and writing had a profound influence on the development of non-objective, or abstract art, in the 20th century.