“Geometric abstraction is a form of abstract art based on the use of geometric forms sometimes, though not always, placed in non-illusionistic space and combined into non-objective (non-representational) compositions. Although the genre was popularized by avant-garde artists in the early twentieth century, similar motifs have been used in art since ancient times.” Wikipedia.org

The pictorial language of geometric abstraction, based on the use of simple geometric forms placed in nonillusionistic space and combined into nonobjective compositions, evolved as the logical conclusion of the Cubist destruction and reformulation of the established conventions of form and space. Initiated by Pablo Picasso and Georges Braque in 1907–8, Cubism subverted the traditional depiction relying upon the imitation of forms of the surrounding visual world in the illusionistic—post-Renaissance—perspectival space. The Analytic Cubist phase, which reached its peak in mid-1910, made available to artists the planarity of overlapping frontal surfaces held together by a linear grid. The next phase—Synthetic Cubism, 1912–14—introduced the flatly painted synthesized shapes, abstract space, and “constructional” elements of the composition. These three aspects became the fundamental characteristics of abstract geometric art. The freedom of experimentation with different materials and spatial relationships between various compositional parts, which evolved from the Cubist practice of collage and papiers collés (1912), also emphasized the flatness of the picture surface—as the carrier of applied elements—as well as the physical “reality” of the explored forms and materials. Geometric abstraction, through the Cubist process of purifying art of the vestiges of visual reality, focused on the inherent two-dimensional features of painting.

This process of evolving a purely pictorial reality built of elemental geometric forms assumed different stylistic expressions in various European countries and in Russia. In Holland, the main creator and the most important proponent of geometric abstract language was Piet Mondrian (1872–1944). Along with other members of the De Stijl group—Theo van Doesburg (1883–1931), Bart van der Leck (1876–1958), and Vilmos Huszár (1884–1960)—Mondrian’s work was intended to convey “absolute reality,” construed as the world of pure geometric forms underlying all existence and related according to the vertical-horizontal principle of straight lines and pure spectral colors. Mondrian’s geometric style, which he termed “Neoplasticism,” developed between 1915 and 1920. In that year, he published his manifesto “Le Néoplasticisme” and for the next two-and-a-half decades continued to work in his characteristic geometric style, expunged of all references to the real world, and posited on the geometric division of the canvas through black vertical and horizontal lines of varied thickness, complemented by blocks of primary colors, particularly blue, red, and yellow. Similar compositional principles underlie the work of the De Stijl artists, who applied them with slight formal modifications to achieve their independent, personal expression.

In Russia, the language of geometric abstraction first appeared in 1915 in the work of the avant-garde artist Kazimir Malevich (1879–1935) (Museum of Modern Art, New York), in the style he termed Suprematism. Creating nonobjective compositions of elemental forms floating in white unstructured space, Malevich strove to achieve “the absolute,” the higher spiritual reality that he called the “fourth dimension.” Simultaneously, his compatriot Vladimir Tatlin (1885–1953) originated a new geometric abstract idiom in an innovative three-dimensional form, which he first dubbed “painterly reliefs” and subsequently “counter-reliefs” (1915–17). These were assemblages of randomly found industrial materials whose geometric form was dictated by their inherent properties, such as wood, metal, or glass. That principle, which Tatlin called “the culture of materials,” spurred the rise of the Russian avant-garde movement Constructivism (1918–21), which explored geometric form in two and three dimensions. The main practitioners of Constructivism included Liubov Popova (1889–1924), Aleksandr Rodchenko (1891–1956) (Museum of Modern Art, New York), Varvara Stepanova (1894–1958), and El Lissitzky (1890–1941). It was Lissitzky who became the transmitter of Constructivism to Germany, where its principles were later embodied in the teachings of the Bauhaus. Founded by the architect Walter Gropius in Weimar in 1919, it became during the 1920s (and until its dismantling by the Nazis in 1933) the vital proponent of geometric abstraction and experimental modern architecture. As a teaching institution, the Bauhaus encompassed different disciplines: painting, graphic arts, stage design, theater, and architecture. The art faculty was recruited from among the most distinguished painters of the time: Vasily Kandinsky, Paul Klee, Johannes Itten, Oskar Schlemmer, László Moholy-Nagy, Josef Albers, all of whom were devoted to the ideal of the purity of geometric form as the most appropriate expression of the modernist canon.

In France, during the 1920s, geometric abstraction manifested itself as the underlying principle of the Art Deco style, which propagated broad use of geometric form for ornamental purposes in the decorative and applied arts as well as in architecture. In the 1930s, Paris became the center of a geometric abstraction that arose out of its Synthetic Cubist sources and focused around the group Cercle et Carré (1930), and later Abstraction-Création (1932). With the outbreak of World War II, the focus of geometric abstraction shifted to New York, where the tradition was continued by the American Abstract Artists group (formed in 1937), including Burgoyne Diller and Ilya Bolotowsky. With the arrival of the Europeans Josef Albers (1933) and Piet Mondrian (1940), and such major events as the exhibition Cubism and Abstract Art (1936), organized by the Museum of Modern Art, and the creation of the Museum of Non-Objective Art (1939, now the Guggenheim), the geometric tradition acquired a new resonance, but it was essentially past its creative phase. Its influences, however, reached younger generations of artists, most directly affecting the Minimalist art of the 1960s, which used pure geometric form, stripped to its austere essentials, as the primary language of expression. Artists such as Donald Judd, Dan Flavin, and Dorothea Rockburne studied the geometric tradition and transformed it into their own artistic vocabulary. 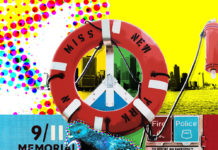