Black holes are ultra modern concept of physics developed very recently.They are black color giants in space who has extremely high gravitational force( its the force with which one body can attract another) and hence can absorb everything.It can actually absorb even light under effect of its gravity and for this reason its black .Its formed by a star which is extremely big in size and eventually as this big stars grows further big ( as stars continue to increase in mass) the gravity of it continues to increase to a point when the star is sucked under its own high gravitational force forming BLACK HOLE. These BLACK HOLES were initially thought as a source of universal destruction but soon it was realized BLACK HOLES are present in every galaxy at its center, and is surely destroying the stars and planets of that galaxy but its also responsible for organizing that galaxy.We know that all stars and planet systems in a galaxy is revolving around its center which is important for the existence of the galaxy itself , but now we know that such revolution of stars are only possible for the extremely high gravitational hence the very organization of galaxy was for the black holes.Interestingly what is universal destroyer has also a positive role.The way it destroys or sucks in stars and planet is also very interesting.These stars and planet attracted by the black hole first revolve around it in super speed as if they are like garlands around it and than it ultimately falls into it .Another interesting thing about them is featured by Albert Einstein’s theory of relativity.We see that theory of relativity states that time gets slow under the effect of gravity so with gravity being super strong in black hole ,time stops in black hole completely.Its one of the few agents known in universe that defeats time and controls the flow of time completely.However quiet recently something new has been understood about the black hole, theory suggest that while the black holes sucks in every thing,deep inside the black hole lies a white hole which very interestingly gives out all the matter sucked up by black hole may be in different time or at different place.Hence to sum up above facts we can say the following 1.Black holes are formed by stars 2.Black holes sucks in everything due to Infinite gravity. 3.Black holes though are destroyers but yet They organize the universe. 4.Black holes are place where time stops. 5.Black holes have a white on the other side Which behaves opposite to black holes.Now comes the amazing part , its strange that some of the new concept of modern physics comes so close to believes of ancient Hinduism.In SANATAN DHARMA lies existence of a devi called SHAKTI who happens to be the wife of the lord SHIVA, now Shakti exist in many forms , out of which one is KALI , Now Kali exhibit some features that we will be discussing now, lets first observe that KALI is a form of feminine energy (DEVI) which consumes everything which comes into or in front of her way no matter how strong it be , and please note the way of her destruction is once again suction or consumption , very similar to Black holes which also consumes to destroy,Needless to say the color given to Kali is an exact match to black holes as both are black.But things would get more interesting if we study a bit more deep, WE know that Black holes are nothing but stars converted into them , hence every black hole is derived of a star or was a star sometime in there life, whereas Kali’s one of the most famous form is called as TARA strangely meaning a star.But wait things are more to come if we observe Kali we will find her neck to surrounded by heads of Demons forming a garland , and if we observe black hole in space we will find that all planet and star before being added to it gravitational pull moves around it with such great speed as if the form a ring or a garland.Kali by her name not only means black but also mean the feminine term for KAL meaning time and in many mythological representation she has been perceived as GODDESS OF TIME or someone who can control time or owns time , miraculously the fact comes so parallel to THEORY OF RELATIVITY by EINSTEIN which amazingly says that Black holes have enough gravity to cease the flow of time or in other words time comes in complete hold of black hole.Now I give you an ultimate one ,as mentioned above a very recent theory related to Black hole has realized that on other side of black hole exist a white hole , whose behavior is just opposite to black hole hence its creative and gives out matter instead of consuming them, to our amazement Kali HAPPENS to be the angry form of devi shakti Who in her calm state is very popularly know as GOURI , in other words OTHER SIDE OF KALI IS GOURI ( MEANING WHITE) OR IF I TRANSLATE IT OTHER SIDE OF BLACK HOLE IS WHITE HOLE. Though I fail to understand the reason behind such miraculous coherence between our religion and our science , but without doubt I enjoy its realization the most. 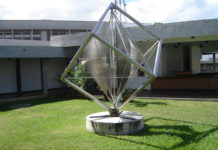