Modern art includes artistic work produced during the period extending roughly from the 1860s to the 1970s, and denotes the styles and philosophy of the art produced during that era. The term is usually associated with art in which the traditions of the past have been thrown aside in a spirit of experimentation.

Modern art, painting, sculpture, architecture, and graphic arts characteristic of the 20th and 21st centuries and of the later part of the 19th century. Modern art embraces a wide variety of movements, theories, and attitudes whose modernism resides particularly in a tendency to reject traditional, historical, or academic forms and conventions in an effort to create an art more in keeping with changed social, economic, and intellectual conditions.

The beginnings of modern painting cannot be clearly demarcated, but there is general agreement that it started in 19th-century France. The paintings of Gustave Courbet, Edouard Manet, and the Impressionists represent a deepening rejection of the prevailing academic tradition and a quest for a more naturalistic representation of the visual world. These painters’ Post-Impressionist successors can be viewed as more clearly modern in their repudiation of traditional techniques and subject matter and their expression of a more subjective personal vision. From about the 1890s on, a succession of varied movements and styles arose that are the core of modern art and that represent one of the high points of Western visual culture. These modern movements include Neo-Impressionism, Symbolism, Fauvism, Cubism, Futurism, Expressionism, Suprematism, Constructivism, Metaphysical painting, De Stijl, Dada, Surrealism, Social Realism, Abstract Expressionism, Pop art, Op art, Minimalism, and Neo-Expressionism. Despite the enormous variety seen in these movements, most of them are characteristically modern in their investigation of the potentials inherent within the painting medium itself for expressing a spiritual response to the changed conditions of life in the 20th century and beyond. These conditions include accelerated technological change, the expansion of scientific knowledge and understanding, the seeming irrelevance of some traditional sources of value and belief, and an expanding awareness of non-Western cultures.

An important trend that began in the 20th century was that of abstract, or nonobjective, art—i.e., art in which little or no attempt is made to objectively reproduce or depict the appearances or forms of objects in the realm of nature or the existing physical world. It should also be noted that the development of photography and of allied photomechanical techniques of reproduction has had an obscure but certainly important influence on the development of modern art, because these mechanical techniques freed (or deprived) manually executed drawing and painting of their hitherto crucial role as the only means of accurately depicting the visible world.

Modern architecture arose out of the rejection of revivals, classicism, eclecticism, and indeed all adaptations of past styles to the building types of industrializing late 19th- and 20th-century society. It also arose out of efforts to create architectural forms and styles that would utilize and reflect the newly available building technologies of structural iron and steel, reinforced concrete, and glass. Until the spread of postmodernism, modern architecture also implied the rejection of the applied ornament and decoration characteristic of premodern Western buildings. The thrust of modern architecture has been a rigorous concentration on buildings whose rhythmical arrangement of masses and shapes states a geometric theme in light and shade. This development has been closely tied to the new building types demanded by an industrialized society, such as office buildings housing corporate management or government administration. Among the most important trends and movements of modern architecture are the Chicago School, Functionalism, Art Deco, Art Nouveau, De Stijl, the Bauhaus, the International Style, the New Brutalism, and postmodernism. 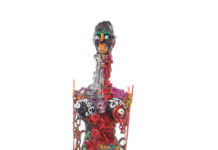 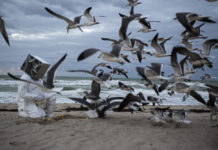 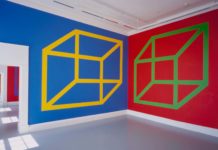