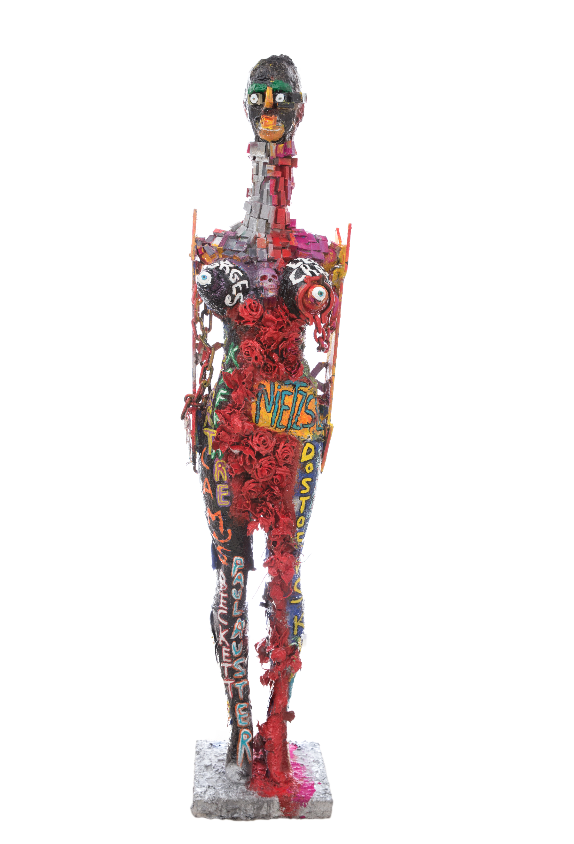 Pompei is the new sculpture by Humberto Poidomani. He has inscribed in this post-expressionist sculpture the vicissitudes and ordeals of humanity in its passing through this incessant COVID-19 pandemic. Poidomani’s Pompeii is based allegorically on the tumultuous and deadly eruption of the Vesuvius Volcano over the richest cities of Pompei and Herculaneum, in Campania, Italy, in 79AD, that instantly killed all its inhabitants. Human bodies, animals, artifacts, food, murals, were covered by layers of ashes, petrified, and encased at the moment of their dead, in a sort of horrific memento mori. The human victims buried by millions of tons of ashes, were captured frozen in contorted positions, in a time capsule.

Poidomani’s sculpture brings to present Pompeii’s tragedy and ordeal as a
metaphor for our troubled current times of collective suffering. The dazzlingly sculpture poses as a cast body as those archeological Pompeian ones, imposing its standing as a spirited presence that manifest crisis and calamity.

The sculpture is profusely intervened with an expressionistically approach, with bursting and contrasting colors, scribbling lines, and bitingly quotes and writings of intellectual perspective. The sculpture shows the names of climactic writers:
Albert Camus, Jean Paul Sartre, Dostoyevsky, Nietzsche, Kafka, Proust, Jorge Luis Borges, Paul Auster, as philosophers and writers that guide his philosophical quest. Phrases of political undertone and social criticism show in the back of the sculpture:
“A camel loaded with gold enters everywhere” quote from the 20 th century famous Spanish dramatist Jacinto Benavente (on the left buttock) or “Viva Yo. No Return Ithaca. Humberto Poidomani” a phrase of ontological implications alluding on Konstantin Cavafy’s Ithaca poem that reminds us that the journey in life is more important than the goal. On the upper back the phrase: “Importaculismo” (“I do not care”) the artist’s neologism and stanza that he does not care about what others could think about him.
The sculpture is crowded with incrusted red roses bleeding onto the ground base, as a precarious poured blood of our current moment. The arms are made of boards in shape of arrows, blended to thick chains, and profuse overflowing biased and subjective phrases critically signaling our human condition.

Pompeii stands as a poltergeist, as an imposing phantom evocating the demons of our humanity. Pompeii’s body that contains multitudes, is a swing confirmation of our contemporary apocalypse and utopia.