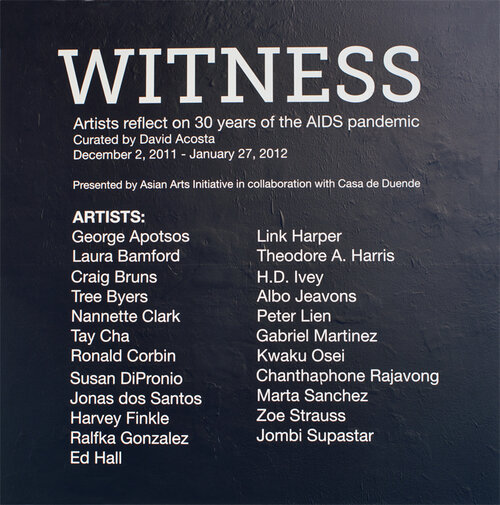 Witness: Artists Respond to 30 Years of the AIDS Pandemic.

30 years ago, on June 5th 1981 the Centers for Disease Control and Prevention (CDC) released its Morbidity and Mortality Weekly Report (MMWR). The report spoke of five cases of Pneumocystis carinii pneumonia (PCP) among previously healthy young men in Los Angeles. The release of the report prompted additional case reports that same year, from New York City, San Francisco, and other places. On August 3rd, the New York Times would publish the first account of it in the major press; the Philadelphia Inquirer followed, publishing its own story on July 4th 1981. I was 23 that year, and like the vast majority of gay men in my generation, we had no idea what a transformative moment those newspaper stories would come to be, what portents they held, and how HIV/AIDS itself would come to define so much of my personal life and that of several generations of gay men in the U.S. and the world.

The current exhibition, Witness: Artists Reflect on 30 Years of the AIDS Pandemic, is in many ways a tribute to that past, but also to this hopeful present, and to the future of a world without AIDS. The current exhibit was conceived a year ago as a way to mark the 30th year anniversary of the AIDS epidemic in Philadelphia. “Witness,” merges two important personal elements for me, my past and current involvement in the field of HIV/AIDS prevention, education, advocacy and policy, (over nearly three decades), and my love for art.

Greatly complicating the curatorial tasks was the realization that the exhibit needed to be large enough to provide a glimpse of the tremendous impact HIV/AIDS has had, and continues to have, on artists, as well as the impact those artists have had on the way we understand the epidemic.  It shouldn’t be surprising therefore, that there is no single story, no unique perspective, no simple way to express what 30 years of this epidemic has meant to millions and millions of people across our planet.

To address this diversity, the current show features twenty-three artists (who hopefully represent a wide range of voices) across race, age, gender, sexual orientation, ethnicity and geographic location. The works on exhibit were chosen to represent both new works created by artists as a response to the call, as well as works that were specifically requested from artists that had created work during the early and middle years of the AIDS epidemic. The show also includes a wide range of visual art including mixed media, painting, sculpture, photography, installation and video. The inclusion of this wide-ranging representation of both old and new visual arts was intentional, and is historically important, – a recognition of work that showed the immediate preoccupations within the context of an epidemic before the scientific and political advances of today. This work created in the face of government, institutional and societal silence gave context to AIDS in its early years, creating the language and narratives through which the world came to see it and understand it.

In looking at the work submitted and the number of artists in the show, I made the decision to separate the visual art from that of the photographers. I thought this would work best both aesthetically (given the space, and the diversity and range of the work submitted and included.) The curating of this exhibition without the inclusion of photographers and photographs was impossible to conceive.  Photography and its artists were central to, and have a long and rich connection to the earliest representations of HIV and AIDS, especially among those who chronicled its early years among themselves, friends and lovers. This was certainly part of the intent and one of the central preoccupations of artists who, in the 1980s and 90s, used photography to convey to the world (frequently and in excruciating detail) the reality of the AIDS epidemic in the communities in which it first made itself known. This work had a deep and profound biographical bent, merging the private with the public. The body politic made bare. And we were asked to bear witness.

The work of these artists/photographers is by now, well known and documented. From the video taping of Peter Hujar’s death by his lover David Wojnarowicz, (including his detailed photographs of Peter’s body after death), to the work of Nan Goldin and the bill boards of Felix Gonzales Torres, photography’s immediacy gave the world the very first graphic images of AIDS. In this exhibition, I have chosen to give the photographers a separate space because I thought their work should be seen in a group context. These photographs, many of them taken during the early years of the AIDS epidemic and some as recent as this year, weave a narrative trajectory which links them back to the visual art on exhibit. They emanate from the same places, and bear the same language, the same preoccupations, fears, hopes, dreams, anxieties and celebrations inherent in the act of witnessing.

In the call to “Witness”, the artists were asked to reflect on, explore and respond to the impact that the HIV/AIDS epidemic has had on our social, cultural and political life over the past thirty years. This is of course their work, but it is also ours as audience, for artists are inextricably linked to the multiple communities we inhabit, their work gives voice to our individual and collective experience.  Their response is our collective story, our individual and community narratives, in the beginning of the second decade of the 21st century, and at the end of the first thirty years of the AIDS pandemic. I hope this show allows us to reflect on what was, what is, and the possibilities of what can be.

The curating of this show has been for me an incredibly rich, rewarding and difficult journey. It is hard to fathom what was lost and what was gained. Memories of those I loved and lost visited often in the course of the past six months, and though they are not here, their memory, their love, their courage and their struggle is always a constant. My own survival comes with the responsibility of bearing witness to what was, is and will be.

In closing, I want to thank the many people without whom “Witness” would not have been possible.  To the artists in the show goes my deepest gratitude.  Without your work and trust in me, this show would not be possible, thank you for your trust and for bearing witness. To Thora Jacobson for listening and believing in this exhibition, and for pitching it to Gayle Isa at the Asian Arts Initiative. I would specially like to thank Nancy Chen, Program Assistant, at the AAI for her support throughout and the incredible amount of work it took to mount this exhibition. I also wanted to give my deepest appreciation to Nelson Santos, Associate Director of Visual AIDS in New York City, for his support and promotion of “Witness”, to my life partner Gerald Macdonald and finally to all of you for being here.  Thank you.

David Acosta is a poet, writer, curator and cultural organizer. Before co-founding Casa de Duende with his life partner Gerald Macdonald where he is currently its Artistic Director, he worked in public health focusing his work on HIV education and prevention. A long time LGBT health care and civil rights advocate, he was involved with many groups fighting for health care and civil-rights during the 80s and 90s.

He is a published author and poet whose work has appeared in many anthologies and literacy magazines. Among the most notable The Americas Review (University of Texas Press, 1997), American Poetry Confronts the 1990s (Black Tie Press 1990), The Limits of Silence (Asterion Press 1991), Poesida (Ollantay Press, 1995) and Floating Borderlands: Twenty Five Years of Latin American Poetry in The United States, (University of Washington Press, 1998).

Literary journals include Mayrena, The James White Review, The Evergreen Chronicles, Philomel and others. He is a contributing writer to Queer Brown Voices, the first anthology focusing on documenting the history of the LGBTQ+ latinx movement in the United States and Puerto Rico. He has curated numerous visual arts shows, including Co-curating Stonewall @ 50 in 2019 at the Leonard Pearlstein Gallery showcasing 129 artists which became the largest LGBTQ+ art exhibition in Philadelphia History.

He was a co-founder of the Philadelphia Latin American Film Festival, and has directed shows for First Person Arts, and has performed at the Barnes Foundation in Philadelphia. He currently serves as the President of the Board of the Da Vinci Arts Alliance, is on the Artist Advisory board of Taller Puertorriqueño, is a member of the board of the Philadelphia Cultural Alliance and is a founding member of the international artist collective Dissident Bodies with members in the USA, Mexico, Colombia, and India and is a member of the Dislocada artist collective in Philadelphia. He was also co founder along with the artist poet and writer Susan DiPronio of Wicked Gay Ways a literary and arts journal devoted to queer erotica, He is currently at work on several projects including organizing two large photographic exhibitions in the spring and summer of 2022.