Home Art TRAPPED BETWEEN THE ABSURD AND THE REASONABLE 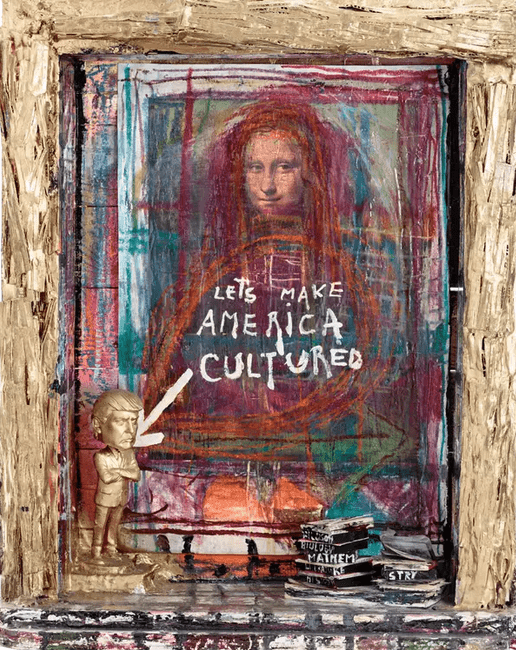 To observe Humberto Poidomani’s artwork (Buenos Aires, Argentina, 1942) as a spectator is to travel through a wide path of thematic variety with a complex compositional technique loaded with symbolism, and in a perfect balance between the absurd and the reasonable; an eccentric twist of sensations and colorful explosion where fantasy and paradox, intertwine.

Poidomani is a prolific artist of tireless productivity. He creates his speech by superimposing materials in silly combinations, creating fantastic stories with a formalism centered on ideological notions that he captures in complex sculptures, assemblages, collages, painting and various objects, where the resource of writing is present in dense and continuous strokes sometimes unintelligible; many others, understandable.

The social complexity of life in Argentina is treated with intelligent humor and sarcasm in Teatro de la vida series, where topics of socio-political and ecological content are complemented with small texts included in the assembly of wooden boxes in small format 63 x 52 x 18 cm (24.8 x 20.4
x 7.08 in).
Argentina Potencia, a series developed over several years, shows in its various pieces the ironic touch of a collective desire for a better country.

The series Babel , pictorial work in a medium format of 150 x 150 cm (59 x 59 in) gathers a set of pieces in which different states of mind —anguish, desolation, isolation, arrogance and abandonment, among others— are approached in complexity compositional with a great material and gestural load. Unintelligible texts occur in a kind of linguistic confusion, horizontally or vertically oriented, and arranged in quadrants with orthogonal axes guiding the viewer’s gaze as if it were a guided reading.

In Divina Comedia —homonymous series to the epic poetry of Dante Alighieri—, the artist recreates his own visual poem with luxurious compositional details and with great formal achievement. Divina Comedia, Dante’s Inferno and Purgatory are allusive titles to the compendium
of medieval culture and that is what the literary author outlined in his own work. Poidomani takes up in his plastic speech part of the literary work to turn it into a visual story loaded with symbolic content.

In another of his series of three- dimensional works, Art with objects, the artist expresses his socio- political opinion about the USA the country in which he currently resides. Let’s make America cultured, Enchanted House, Children of War and Voluntary Servitude –in reference to the essay by
Étienne de La Boétie– are wood assemblage boxes with oil, resin and diversity objects in which the word has a metaphorical weight in the work’s context. Once again, Poidomani shows off black humor in an acid thought.

The sculpture work does not escape to the complex diversity or the playful visual game and becomes a fun bet to say the least, loaded with symbolism in each of his pieces made up of recycled objects, acrylic and resin.

Approaching the work of Humberto Poidomani becomes a liberating glint without ties to taste or pleased work. Gesture, humor and irony come together in a stimulating and noisy way; a joyful transit where the viewer never loses his capacity of wonder.