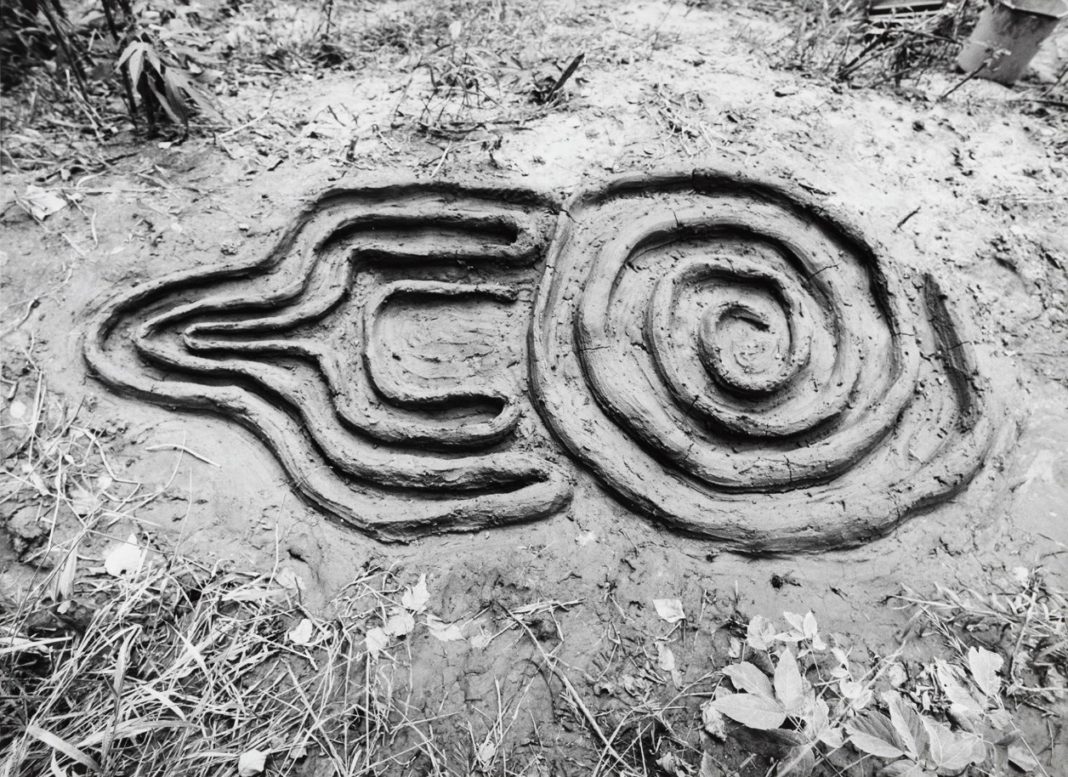 Ana Mendieta (November 18, 1948 – September 8, 1985) was a Cuban American performance artist, sculptor, painter and video artist who is best known for her “earth-body” art work. Originally born in Havana, Mendieta arrived in the United States as a refugee in 1961, shortly prior to the beginning of the Cuban Revolution.

Mendieta was born in Havana, Cuba to a family prominent in the country’s politics and society. At age 12, in order to escape Fidel Castro’s regime, Ana and her 14-year-old sister Raquelin were sent to the United States by their parents. Through Operation Peter Pan, a collaborative program run by the U.S. Government and the Catholic Charities, Mendieta and her sister spent their first weeks in refugee camps before moving to several institutions and foster homes in Iowa. In 1966, Mendieta was reunited with her mother and younger brother; her father joined them in 1979, having spent 18 years in a Cuban political prison for his involvement in the Bay of Pigs invasion.

Mendieta attended the University of Iowa where she earned a BA, an MA in Painting and an MFA in Intermedia under the instruction of acclaimed artist Hans Breder. Through the course of her career, she created work in Cuba, Mexico, Italy, and the United States.

Mendieta’s work was generally autobiographical and focused on themes including feminism, violence, life, death, place and belonging. Her works are generally associated with the four basic elements of nature. Mendieta often focused on a spiritual and physical connection with the Earth. During her lifetime, Mendieta produced over 200 works of art using earth as a sculptural medium. The Silueta Series (1973–1980) involved Mendieta creating female silhouettes in nature – in mud, sand and grass – with natural materials ranging from leaves and twigs to blood, and making body prints or painting her outline or silhouette onto a wall.

In 1978, Ana Mendieta joined the Artists In Residence Inc (A.I.R. Gallery) in New York, which was the first gallery for women to be established in the United States. The venture allowed for the opportunity for Mendieta to network with other women artists at the forefront of the era’s feminist movement. During that time, Mendieta was also actively involved in the administration and maintenance of the A.I.R. In an unpublished statement, Mendieta noted that “It is crucial for me to be a part of all my art works. As a result of my participation, my vision becomes a reality and part of my experiences.” It was during her time at the gallery that she met her future husband Carl Andre. Her resignation in 1982 is attributed to a dispute instigated by Andre over a collaborative art piece the couple had submitted.

While in residence in Rome, Mendieta began creating art “objects,” including drawings and sculptures. She continued to use natural elements in her work.. In 1983, Mendieta was awarded the Rome Prize from the American Academy in Rome.

In 2009, Mendieta was awarded a Lifetime Achievement Award by the Cintas Foundation. Ana Mendieta’s estate is currently managed by the Galerie Lelong in New York City. The estate is also represented by Alison Jacques Gallery, London.

Silueta Series (1973–1980)
When she began her Silueta Series in the 1970s, Mendieta was one of many artists experimenting with the emerging genres of land art, body art, and performance art. Mendieta was possibly the first to combine these genres in what she called “earth-body” sculptures. She often used her naked body to explore and connect with the Earth, as seen in her piece Imagen de Yagul, from the series Silueta Works in Mexico 1973-1977. Mendieta’s first use of blood to make art dates from 1972, when she performed Untitled (Death of a Chicken), for which she stood naked in front of a white wall holding a freshly decapitated chicken by its feet as its blood spattered her naked body. Appalled by the brutal rape and murder of nursing student Sarah Ann Ottens at the University of Iowa, Mendieta smeared herself with blood and had herself tied to a table in 1973, inviting an audience in to bear witness. In a slide series, People Looking at Blood Moffitt (1973), she pours blood and rags on a sidewalk and photographs a seemingly endless stream of people walking by without stopping, until the man next door (the storefront window bears the name H. F. Moffitt) comes out to clean it up.

Mendieta also created the female silhouette using nature as both her canvas and her medium. She used her body to create silhouettes in grass; she created silhouettes in sand and dirt; she created silhouettes of fire and filmed them burning. Untitled (Ochún) (1981), named for the Santería goddess of waters, once pointed southward from the shore at Key Biscayne, Florida. Ñañigo Burial (1976), with a title taken from the popular name for an Afro-Cuban religious brotherhood, is a floor installation of black candles dripping wax in the outline of the artist’s body. Through these works, which cross the boundaries of performance, film and photography, Mendieta explored her relationship with place as well as a larger relationship with mother Earth or the “Great Goddess” figure.

Mary Jane Jacob suggests in her book Ana Mendieta: The “Silueta” Series (1973-1980) that much of Mendieta’s work was influenced by her interest in the religion Santería, as well as a connection to Cuba. Jacob attributes Mendieta’s “ritualistic use of blood,” and the use of gunpowder, earth and rock to Santería’s ritualistic traditions.

Jacob also points out the significance of the mother figure, referring to the Mayan deity Ix Chel, the mother of the Gods. Many have interpreted Mendieta’s recurring use of this mother figure, and her own female silhouette, as feminist art. However, because Mendieta’s work explores many ideas including life, death, identity and place all at once, it cannot be categorized as part of one idea or movement.

Photo etchings of the Rupestrian Sculptures (1981)
As documented in the book Ana Mendieta: A Book of Works, edited by Bonnie Clearwater, before her death, Mendieta was working on a series of photo-etchings of cave sculptures she had created at Escaleras de Jaruco, Jaruco State Park in Havana, Cuba. Her sculptures were entitled Rupestrian Sculptures (1981) – the title refers to living among rocks – and the book of photographic etchings that Mendieta was creating to preserve these sculptures is a testament to the intertextuality of Mendieta’s work. Clearwater explains how the photographs of Mendieta’s sculptures were often as important as the piece they were documenting because the nature of Mendieta’s work was so impermanent. Mendieta spent as much time and thought on the creation of the photographs as she did on the sculptures themselves.

Mendieta returned to Havana, Cuba, the place of her birth for this project, but she was still exploring her sense of displacement and loss, according to Clearwater. The Rupestrian Sculptures that Mendieta created were also influenced by the Tainan people, “native inhabitants of the pre-Hispanic Antilles,” which Mendieta became fascinated by and studied.

Mendieta had completed five photo-etchings of the Rupestrian Sculptures before she died in 1985. The book Ana Mendieta: A Book of Works, published in 1993, contains both photographs of the sculptures as well as Mendieta’s notes on the project.

Body Tracks (1982)
Body Tracks (Rastros Corporales) are long, blurry marks that Mendieta’s hands and forearms made as they slid down a large piece of white paper during a performance heightened with pulsing Cuban music.
Exhibitions and collections
In 1979 Mendieta presented a solo exhibition of her photographs at A.I.R. Gallery in New York. She also curated and wrote the introductory catalog essay for an exhibition at A.I.R. in 1981 entitled Dialectics of Isolation: An Exhibition of Third World Women Artists of the United States, which featured the work of artists such as Judy Baca, Senga Nengudi, Howardena Pindell, and Zarina. The New Museum of Contemporary Art in New York hosted Mendieta’s first survey exhibition in 1987. Since her death, Mendieta has been recognized with international solo museum retrospectives such as “Ana Mendieta”, Art Institute of Chicago (2011); “Ana Mendieta in Context: Public and Private Work”, De La Cruz Collection, Miami (2012). In 2004 the Hirshhorn Museum and Sculpture Garden in Washington, D.C., organized “Earth Body, Sculpture and Performance”, a major retrospective that travelled to the Whitney Museum of American Art, New York, Des Moines Art Center, Iowa, and Miami Art Museum, Florida (2004).

Death and controversy
Ana Mendieta died on September 8, 1985 in New York from a fall from her 34th floor apartment in Greenwich Village’s 300 Mercer Street, where she lived with her husband of eight months, minimalist sculptor Carl Andre. She fell 33 stories onto the roof of a deli, Just prior to her death, neighbors heard the couple arguing violently. There were no eyewitnesses to the events that lead up to Mendieta’s death A recording of Andre’s 911 call showed him saying: “My wife is an artist, and I’m an artist, and we had a quarrel about the fact that I was more, eh, exposed to the public than she was. And she went to the bedroom, and I went after her, and she went out the window.” In 1988, Andre was tried and acquitted of her murder. During the three-year trial, Andre’s lawyer described Mendieta’s death as a possible accident or suicide. The juror found Andre not guilty on grounds of reasonable doubt.

Andre’s acquittal caused an uproar in the feminist art world, and continues to remain controversial to this day. In 2010, a symposium called Where Is Ana Mendieta was held in New York University to commemorate the 25th anniversary of her death. In May 2014, the feminist protest group No Wave Performance Task Force staged a protest in front of the Dia Art Foundation’s retrospective on Carl Andre. The group deposited piles of animal blood and guts in front of the establishment, with protest members donning transparent tracksuits with “I Wish Ana Mendieta Was Still Alive” written on them. In March 2015, the No Wave Performance Task Force and a group of feminist poets from New York City traveled to Beacon, NY to protest the Andre retrospective at Dia:Beacon, where they cried loudly in the main gallery, made “siluetas” in the snow on museum grounds, and stained the snow with paprika, sprinkles, and fake blood.