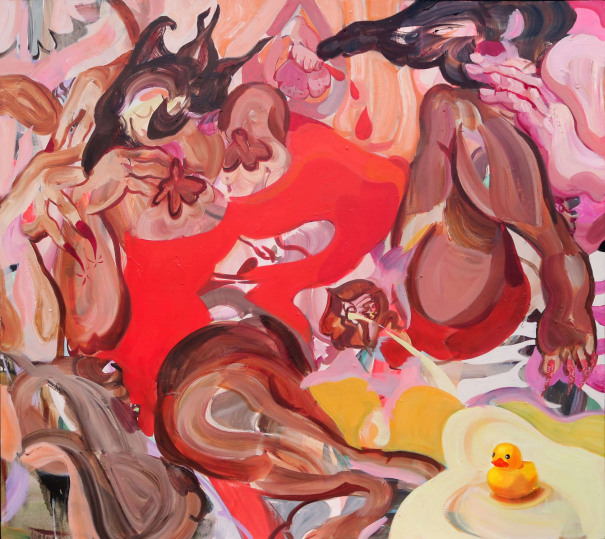 This interview is available in both Spanish and English.

Peruvian-born, Lima-based artist Wynnie Mynerva is at the forefront of sexual expression, deconstructing gender constructs. Minerva, who is represented by LatchKey Gallery, develops site-specific installations and multi-person, participatory, action-based paintings as a form of building community. In this interview, we dive deep into the artist’s representations of the body and their views on dismantling repression associated with human sexuality.


RICKY AMADOUR: Nice to meet you. I wanted to get to know you more and ask you something straightforward. Where are you from and what was your first interest in painting and art?

WYNNIE MYNERVA: I was born in Lima, Peru. I feel it is important to mention the district where I was born, Villa El Salvador. Lima has different social strata and places of conflict, and Villa El Salvador is located on the outskirts of the city. From a very young age, I wanted to paint. I have painted and won contests since I was a child. I’ve had artistic talent since I was little, and they celebrated me for it. My family didn’t know precisely what art was, but they knew about painting more broadly. I wanted to be a painter and ended up a visual artist in a state-run public school in Lima.

RA: Your art is very personal and displays a lot of intimacy, especially with sexuality. What representations do you not see at the moment?

WM: I am interested in the representation of dissidence, the periphery, and aberrant bodies. Bodies that are not controlled, that are not consumed, that do not want to be consumed and do not allow themselves to be consumed. I think of representation as plural. I like to talk about the intimate because I fear taking someone else’s voice. In other words, I fear appropriating something, because paintings have that power. That’s one of maybe a few pros and cons. Sometimes the market can misrepresent the meaning of what one wants to say in a painting. So, in that sense, I like to talk about what is intimate so as not to talk about the other, not to speak about them from my perspective, which I ultimately think is reductive. What I articulate is a bit of life, of a society where I was born, grew up, and live in a society that, in the end, has condensed me and many people like me who come from similar circumstances. In that sense, I like to give my body to action painting, performance, and drawings to become a subject of experimentation and investigation.

RA: I am a non-binary person. I feel very comfortable viewing your work and feel like I can be part of that representation. How do you create empathy for diverse expressions?

WM: I am primarily interested in getting out of the heterosexual model. Getting away, for example, from genitals that “belong” to sexual identity and that are representative of a specific body. I was born a biological female and socialized as a biological female. When I started painting, I thought hard about how women are represented in painting and about changing the paradigm of women as consumables. Later on, when I stopped connecting with the idea of being a woman and began to identify as a non-binary person, the scope of my work expanded. I may look feminine, but I don’t have a vagina or want children; I’m not a biological woman. I recently had a relationship with a trans woman and like variety. The fluidity of concepts, of ceasing to abide by constructs, is something that interests me not only in art but in life.

RA:And how did you determine these ideas?

WM: By approaching my work through feminism, I attempted to leave behind the idea of identifying myself by my vagina to build my own vision of femininity and masculinity. But it didn’t work out. When I found out that you could be non-binary, I found myself.

RA: Is it to seek dignity?

WM: In my paintings, what I look for are social relationships. Seeing how bodies interact, become energy, become worthy vital forces. Not solely as a representation of the damaged body. It is an integral part of my work to talk about violence, but also as a gesture that dignifies the body somehow, showing power beyond the victim.

RA: You could say that your site-specific installations are celebratory events.

WM: My works, for example, are celebrations and parties. I like the idea of a party, a celebration, where the colors burst, where people live an event within the painting, which is something one may yearn for. It is not a place where someone says “poor thing,” but rather, where they can enjoy themselves. So, I feel it is in that dignity that I like to present my projects. Like an act of revenge, a feat, a triumph.

RA: I have close friends, especially in Colombia, who are along the same lines as you, including Olga Robayo from Residencia El Parche, Daniela Maldonado from La Red Communitaria Trans (The Trans Community Network), and Christian Howard Hooker from Corporación Colectivo CalleShortBus. In art, a new mentality is developing in how people represent themselves in society and how they oppose machismo, acting together against violence.

WM: There have been many particular instances of violence that made me want to touch on human trauma. For me, art is a form of therapy to talk about what continues as memory and pain. It is a constant drive. My projects, I’ve realized, are means to explore those other perspectives.

RA: Shall we say sex positivity?

WM: For example, about sex positivity. How do we use sex as a space for creativity and an ideological space? It is not only about having sex but as the general performance of our lives. We talk about the dominating and the dominated as the most basic power institutions of heterosexuality. They have moved into endless possibilities to do so, for example, from guilt or guilt in sex, or as good and evil, which is often rooted in religious tradition. For instance, in one of my exhibitions, I proposed El Jardín de las Delicias (The Garden of Earthly Delights), where people have sex inside latex bags. I wanted a garden where people could go to enjoy themselves. And the idea of having sex is a thing so common. We do it every day. Yet, it is so difficult to observe or know that it exists. The people who attended the room entered and could sense what was happening. People knew others were having sex inside the bags and had to live with that scene.

WM: They couldn’t get away from it because it was part of the exhibit, and I installed a big synthetic floor where visitors were invited to sit. They began to sit down, and a chimerical image occurred from one moment to another, almost dreamlike. People had their drinks and talked while they looked around at how people were having sex and at how others were reacting.

RA: How do you choose the people involved in your projects? And how can they participate?

WM: The truth is that I am constantly approached by people who want to dare to do something. By lawyers, doctors, engineers, and the baker who sells you bread. People want to live experiences. I invite them to my studio, and we talk to see if their intentions are serious. There are people from all walks of life. That also interests me in my work. The painting is like a stage, and they are like the actors; it’s super theatrical, dramatic, and I like that.

RA: Have you had confrontations from other people who don’t like what you’re doing or feel differently?

WM: Yes, during my first exhibition, El Otro Sexo (The Other Sex) which was presented in a language center. Children attended on Saturdays, so parents got together to close the presentation. It became a commotion of wanting to remove the actual sticks with their hands, and in the end, they canceled the show. It lasted less time. It has happened enough that there are people who write to me, persecute me, are disoriented because of the content I make, and threaten me, even in my artist community.

RA: What are your hopes, and how do you see the future?

WM: I feel that things are progressing very slowly. I think that my job is to try to touch the future, which I would like to enjoy, but will not see in the end. And so, for example, that’s why I had my operation, my sexual reassignment. That’s why I’ve done a lot of work that maybe, in some way, is like wanting to reach something; to touch the limits. I want people to see sexuality as a transgression, a form of taking over, accessible to play and enjoy.

Amadour is an interdisciplinary artist who works with painting, sculpture, sound, and performance to investigate landscape, architectural forms, and our relationship as humans to built and natural environments. They received dual BA degrees in studio art and art history from the UCLA School of Arts and Architecture in 2018.